The first thing you need to know is that I am obsessed with animals and with books! Both were my best friends growing up and remain that way to this day, even though I have finally learned to people and even have friends of the human variety these days.

I live in a cottage in the Alaskan wilderness with my five dogs, stay-at-home husband, amazing diva daughter, one very snarky feline named Schrödinger, one sweet but mentally unhinged kitty named Merlin the Magical Fluff, and one hairless cat named Monty, short for Whiskers Montreal, the cat of Monte Cristo.

Let's start with a collage of photos I put together to show off my cat, Schröe. He's a rescue kitty of unknown breed, but we suspect there may be Siamese, Maine Coon, or something like that in there! Go ahead and scroll down to see those pics... And tell me, what do you think he could be? I'd also love to see pictures of your pets, so please write back and tell me about them!

We adopted a second rescue cat in fall 2019, and my daughter promptly dubbed him "Merlin the Magical Fluff." Turns out he really was magical.

You see, he became very ill shortly after bringing him home and needed to go to the vet every day for fluids and medicine. On Halloween night, I stayed home from taking our daughter trick-or-treating, because we all (even the vet) expected him to pass before morning.

But this magical little kitty who could didn't die, he got better almost as if a switch had been flipped. Now he is a crazy, little guy and such a character. He thinks he's one of the dogs and wants to do whatever they're doing, including chewing on rawhides, dressing up, and going on walks. Also he cannot resist the lure of the red dot and has been known to execute a ten-foot vertical leap in pursuit!

Whiskers Montreal (Monty for short) joined the menagerie at Casa de Fitz in May 2021. Don't let his scowl fool you. This red Sphynx cat is a true sweetheart.

Just because he's a hairless cat doesn't mean Monty is a nudist. While it's true that he enjoys bouncing around in his birthday suit, Monty can rock a wide range of fashion styles from tropical prints to sweaters made from upcycled socks.

Monty has such a great personality that he wins the hearts of everyone he meets whether they're human, canine, or his fellow felines. Even Mr. Storm, a self-proclaimed non-cat lover, has come around. He took the pic of Monty amongst the purple flowers featured in the collage. 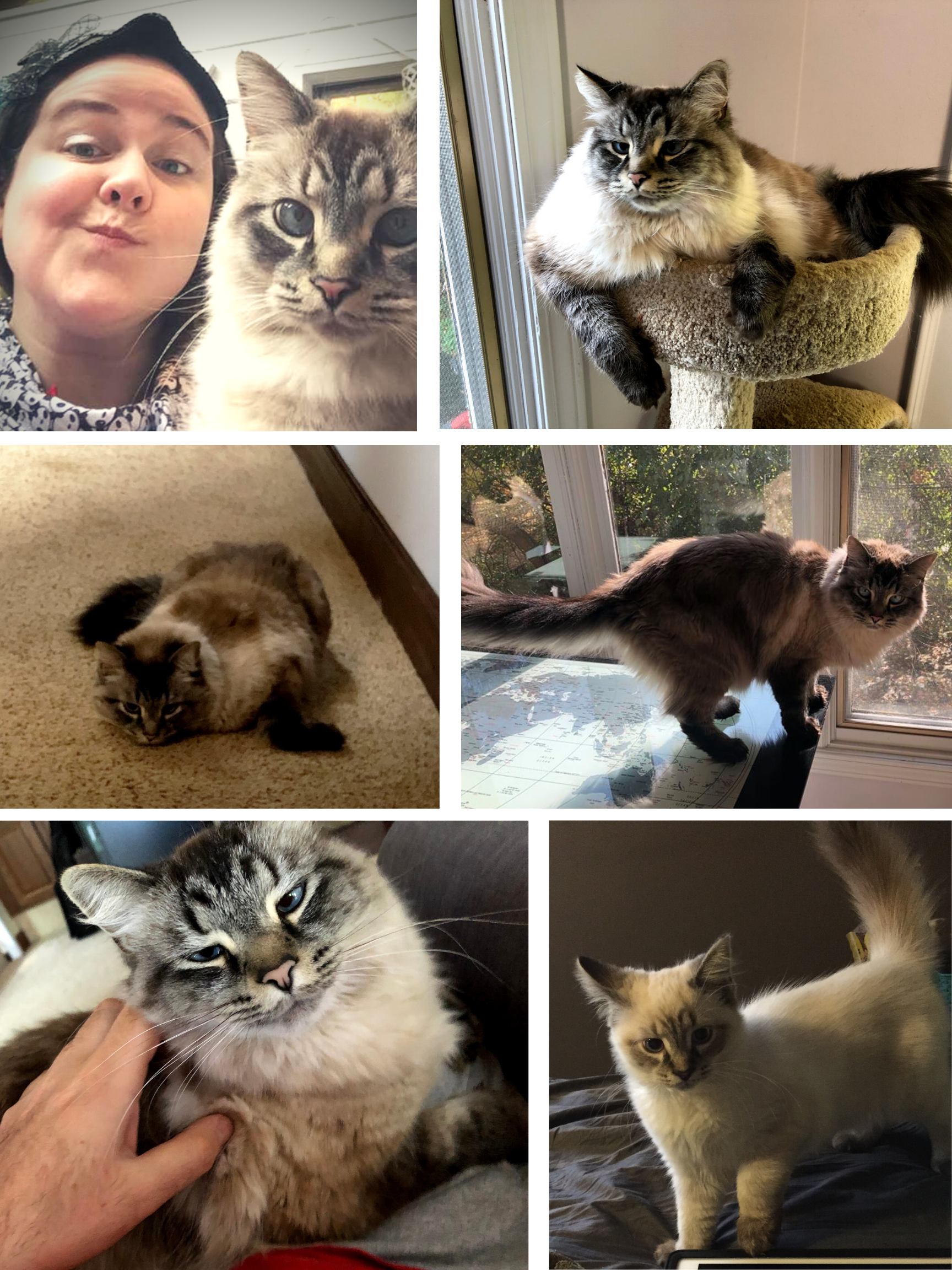 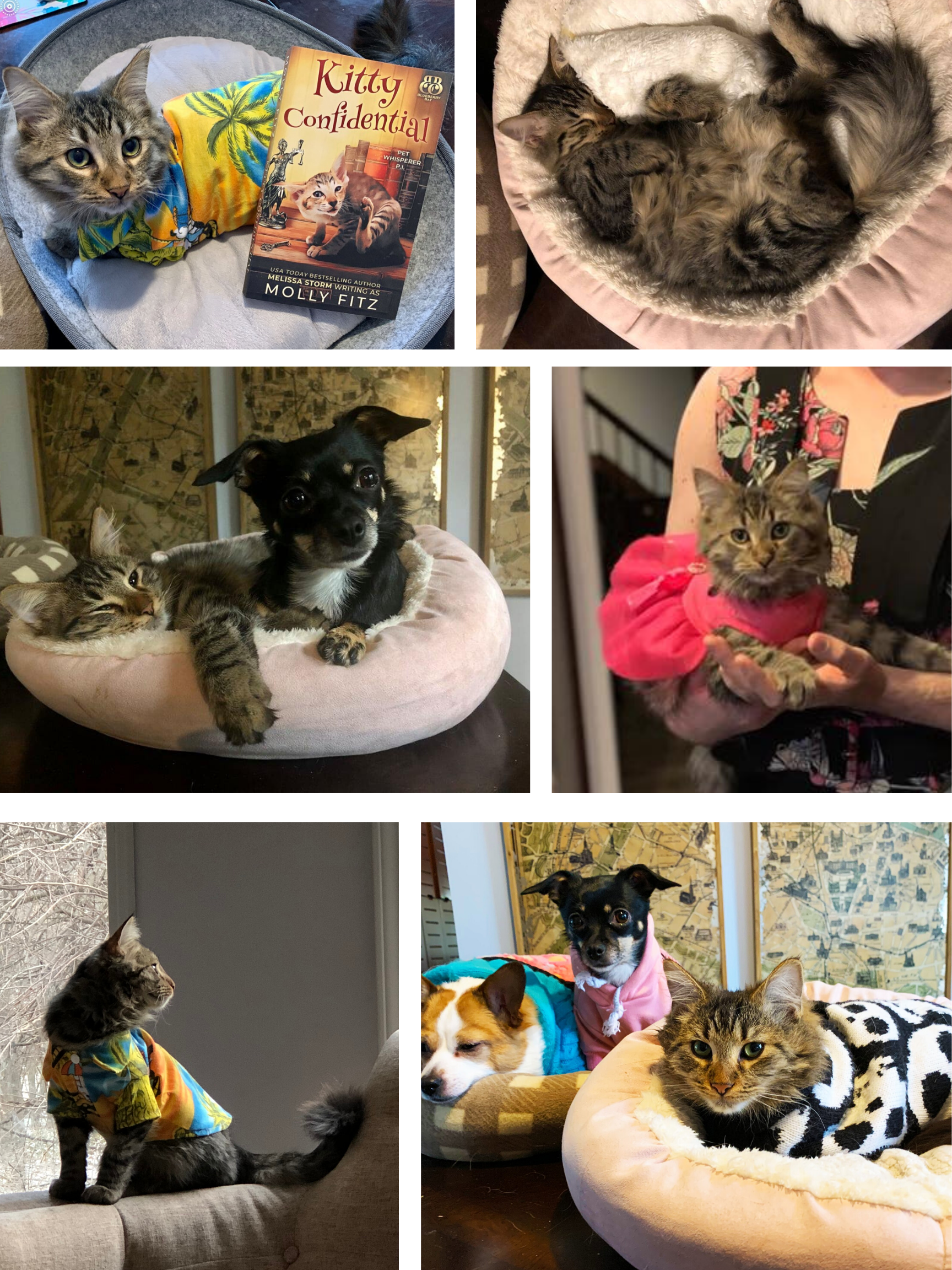 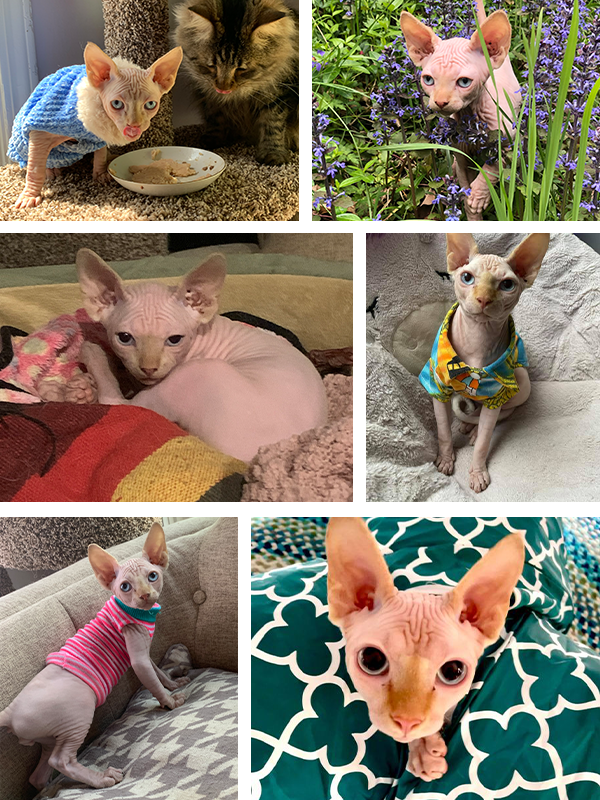